Originally published in 1979, The California Water Atlas, a monument of 20th century cartographic publishing, has been scanned and put online for free public access by the David Rumsey Map Collection. Linda Vida, Director of The Water Resources Center Archives of the University of California asked David Rumsey and Cartography Associates to scan and make available to the public this extraordinary book. The copyright holder, the California Governor's Office of Planning and Research, agreed to allow free public access online.

The book was digitized at very high resolution so the resulting images can be explored, revealing all the amazing detail in the many diagrams, maps, and illustrations that accompany the extensive text. The original work was a collaborative effort involving many individuals in and outside the government of then Governor Edmund G. (Jerry) Brown, Jr., including William L. Kahrl, Project Director and Editor; William A. Bowen, Cartography Team Director; Stewart Brand,  Advisory Group Chairman; Marlyn L. Shelton, Research Team Director; David L. Fuller and Donald A. Ryan, Principal Cartographers; and many others who contributed to the project.

The atlas may be viewed in three formats online: in the LUNA Browser of the David Rumsey online collection, in a Flip Book Reader at the Internet Archive, and in three PDF files, low (46MB), medium (72(MB), and high (180MB) resolution (For the PDF's, Firefox or Chrome are recommended since they support PDF progressive download; IE and Safari will download the PDF's but only show them at the end). All files can also be downloaded from the Internet Archive site.  When viewing the atlas online, it is best to use as big a screen as possible because the original book is large, 47cm high and 41cm wide (82cm wide when opened to two page view).

Use of the digital files is free for all personal, non-commercial uses, governed by a Creative Commons License. All the scanning, metadata creation, uploading to LUNA and to the Internet Archive was done by David Rumsey and fellow Cartography Associate colleagues Dan Holmes and Kristian McManus. When the atlas came out in 1979, it got rave reviews from both historians and scientists. Charles Wollenberg, writing in the California Historical Quarterly, called it "a very big and beautiful book...well-written, spectacularly illustrated, and filled with useful information for expert and layman alike...an indispensable sourcebook for decades to come." The Quarterly Review of Biology said it was "a major reference work of interest to applied ecologists concerned with water supply and usage and to ecologists in general in California." Over 30 years old, the atlas is still fresh and germane to today's issues and no doubt will be so for a long time to come.

Below are selected pages from The California Water Atlas: 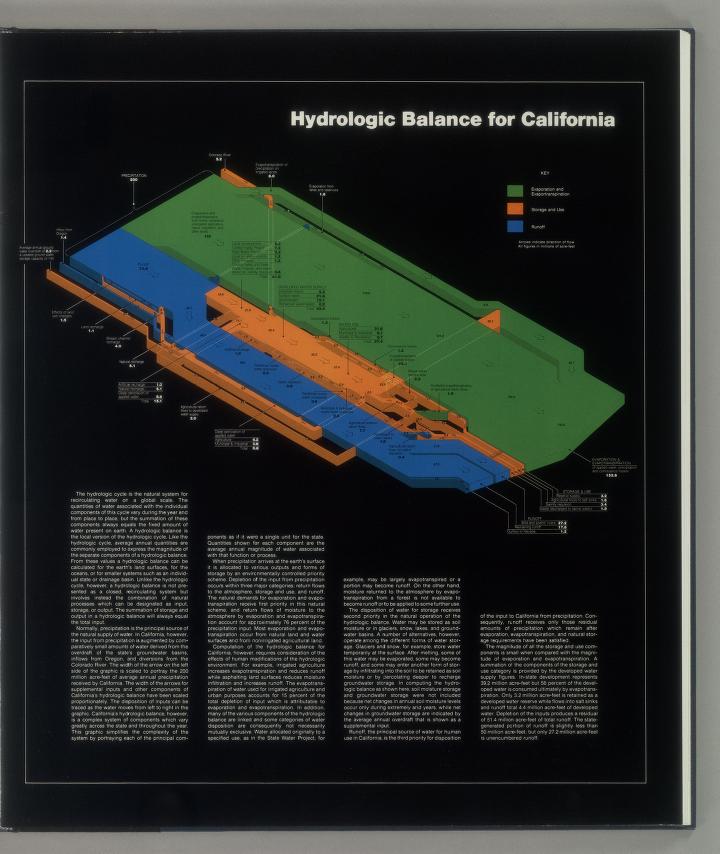 "Hydrologic Balance for California." Page (v).  A schematic diagram showing how "the hydrologic cycle is the natural system for recirculating water on a global scale"
View in LUNA Browser or in Flip Book Reader

"Annual Runoff and Seasonality." Pages(8)-9. Map of runoff including table of principal drainage basin areas. Diagrams of seasonal (monthly) variability in runoff for 33 streams in seven basins.
View in LUNA Browser or in Flip Book Reader 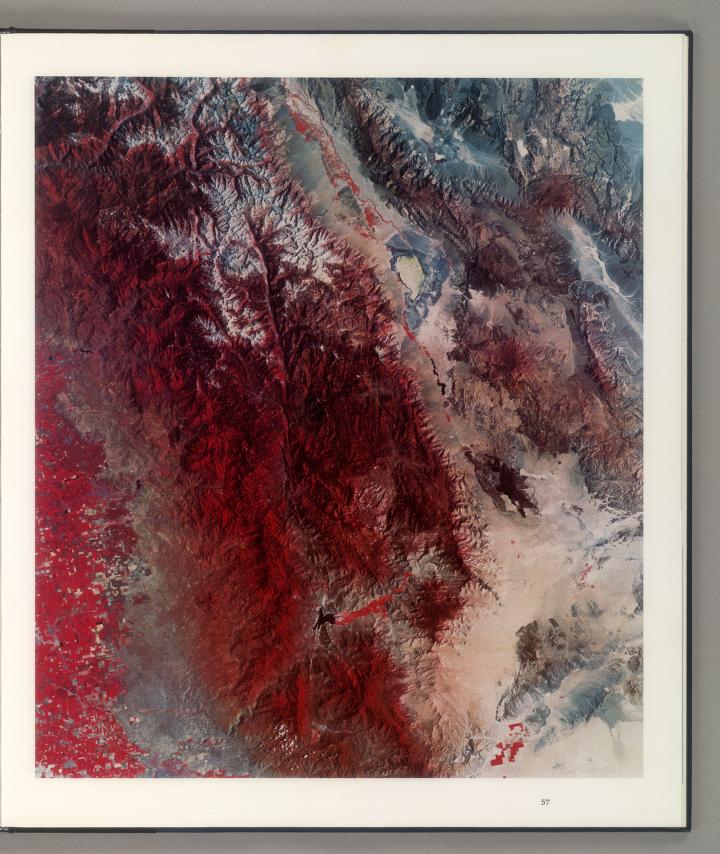 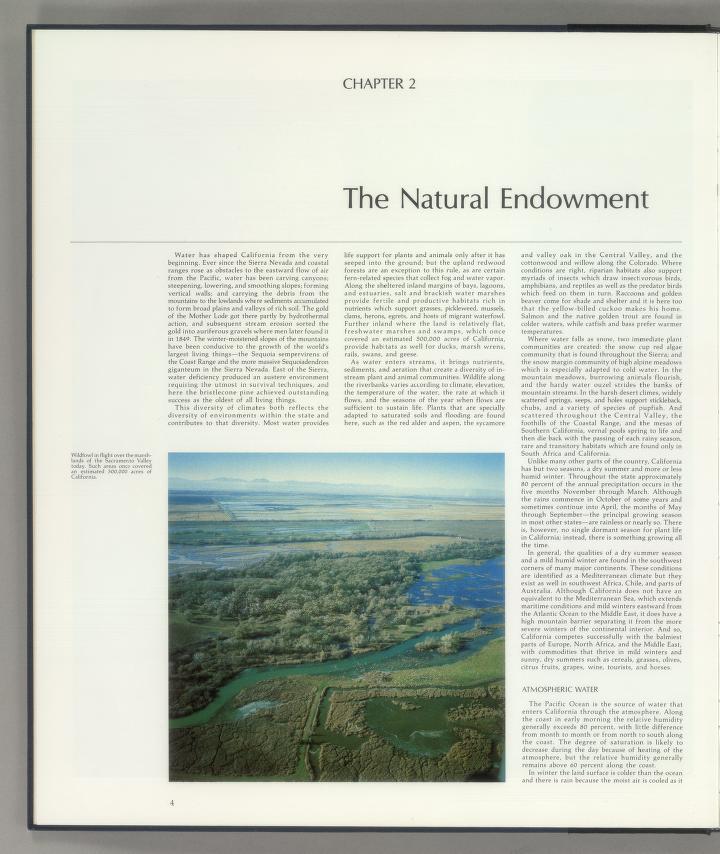 "Chapter 2. The Natural Endowment." Page 4. Image of wildfowl in flight over the marshlands of the Sacramento Valley.
View in LUNA Browser or in Flip Book Reader "Crop Patterns and Applied Water." Pages (82)-(83). Maps of a 2 mile by 70 mile strip of land in Fresno County. Shows crop types and the amount of applied irrigation water.
View in LUNA Browser or in Flip Book Reader Below are all the pages of The California Water Atlas - click on any page to open it in a full window.

Thank you so much for making this work available once more. When the state destroyed all the artwork many years ago, I thought that our efforts would be lost to posterity. It is a great treat for me to see my efforts resurrected and made available to a much larger audience.

I did not know that the original artwork had been destroyed. Now I am especially pleased that we put this online, both for access, and for preservation. Thanks for your comments and also for your wonderful art and cartography in the atlas.

The Water Atlas was one of the utter gems of California cartography – and historical geography – and despite having my own cherished copy, I’ve lamented not being able to share with very many others its unique plates—unique in part for their data and other information, but equally because each map, graph, or chart (often several together on one plate) made for a stunning example of graphic literacy and intelligence. THANK YOU for making this so easily available.

This is indeed a wonderful resource. It is kind of shocking in hindsight that a state agency would undertake a work like this. Learning about this book inspired me to seek out and buy a used copy of the print edition.

In about 1980 I read about this atlas in the Whole Earth Catalog and (stretching my budget as a college student) gave a copy to my farmer cousins in Kern County where it was much discussed. As a cartographer I wished I had a copy for myself- and now I do! Thank you!!!!

I use my 1979 Water Atlas all the time, always wishing for more current data. Now you have updated a classic. My highest compliments and I look forward to working with your results. #

In my senior year of college at UCSB I took a general ed. class for units. It was California Geography. The professor was somehow involved in this and had a friend come in and talk to the class about it. I wanted to buy one, but at $47.00 they were pricey for someone getting ready to graduate move and go to grad school. I now wished I had bought one! #

Thank heavens you saved this book! #

Used this many years ago for a college course. Glad it is still available as it is an incredible resource. Nothing beats an old hardcopy. They should republish it. Water is the most important resource and it could not be truer than in my home state (now in Colorado.) Incidentally, I've been to the headwaters and on the entire border of the river to Arizona. #

I like the fact that this info, at least the digital ones are under the creative commons license! Thanks for sharing! #