Julius Bien (1826-1909) was an American lithographic printer and cartographer who worked in New York City in the second half of the 19th century.  He was responsible for the publication of thousands of maps issued by the U.S. government and private map publishers. He was a pioneer in the development of chromolithography. He is recognized as one of the finest map printers of his time.  The Rumsey collection contains over 1,100 maps published by Bien.  Although authorship of 19th century maps and atlases is never limited to one person, and most of these cartographic productions list authors other than Bien, it is clear that he had a major role in shaping the final results.  Bien's printing and publishing of geological maps was outstanding and he took geological visualizations to new levels, as can be seen in the example below from Hayden's Atlas of Colorado, 1881. One of the plates for Hayden's Atlas of Colorado, printed by Bien.  Title: SW. Colorado and Parts of New Mexico, Arizona and Utah. U.S. Geological and Geographical Survey of the Territories. F.V. Hayden in Charge. Wm. H. Holmes, and F.M. Endlich, Geological Assistants. Surveyed in 1874 & '75. Sheet XV.

Bien was born in Naumburg, Germany in 1826 and was educated at the Academy of Fine Arts in Cassel and at Stadel's Institute in Frankfurt. He became involved with the German revolution of 1848, which led to his immigration to America in 1849. He established a lithographic business in New York City in 1850 and continued it there for over 50 years. Bien was drawn to map publishing and was interested in improving the quality of map printing.  He  made maps for the growing western surveys including the Pacific Railroad Surveys, the census, the coast surveys, and provided maps during the Civil War. Although primarily a printer, he did publish later in his career several atlases.  His deep interest and understanding of the science of printing make his productions exceptional.  He was given numerous awards during his lifetime and was the first president of the National Lithographers Association.  In addition to his cartographic productions, Bien issued exquisite chromolithographic reproductions of Audubon's Birds of America.

Of Bien's many atlases, his Grand Canyon, Colorado, and Fortieth Parallel are outstanding examples, shown below.

William Henry Holmes' topographical drawings of the 1882 Grand Canyon were printed by Bien with extraordinary result in Dutton's Grand Canyon Atlas. A detail from the Panorama From Point Sublime is shown in the image below: 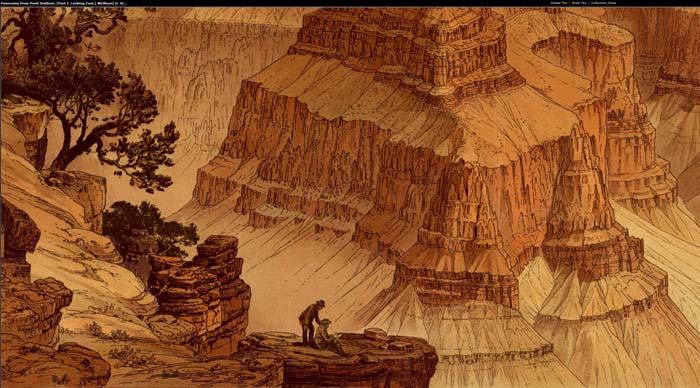 "Panorama From Point Sublime" 1882 - printed by Julius Bien, click on the image to pan or zoom

Bien published the cartographic output of the Wheeler Geographical Surveys West of the 100th Meridian, from 1871 to 1883. The maps are rich in cultural and historical detail from the period.  Below is the title page of the Topographical Atlas sheets. Below is a selection of Bien's cartographic output from 1859 to 1904, as a slide-show - use the arrows to advance the slides; click on the little "i" to view the catalog record; click on "Go to Source" to see the slide-show full screen.

Bien's last atlases were some of his finest - The Atlas of the Metropolitan District of New York, the massive Atlas to Accompany the Official Records of the Union and Confederate Armies, and The Statistical Atlas of the Twelfth Census.

Bien engraved the plates for the U.S. Civil War Atlas titled "Military Maps Illustrating the Operations of the Armies Of The Potomac & James May 4th 1864 to April 9th 1865 including Battlefields of the Wilderness, Spottsylvania, North Anna, Totopotomoy, Cold Harbor, The Siege Of Petersburg And Richmond Battle-fields of Five Forks." The view below shows details from six of those plates, click on the images to open them in a larger window that enables zooming and panning.  The close up details of the battle maps below show the extraordinary level of Bien's printing skill. 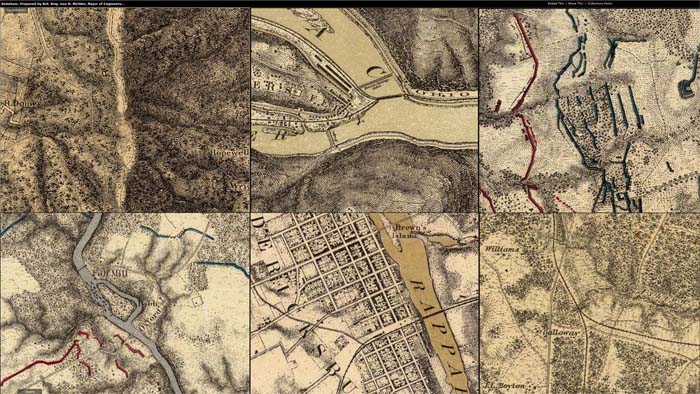 Details of six battle maps printed by Bien for the U.S. Civil War Atlas titled "Military Maps Illustrating the Operations of the Armies Of The Potomac & James..." click on the image to pan or zoom

By the time of Bien's death in 1909 his innovations in printing technology had been recognized by numerous awards and his election as the first president of the National Lithographers Association.  His prolific cartographic output during his lifetime included all the U.S. western surveys, the U.S. Census, the coast surveys, the Pacific Railroad Surveys, Civil War maps, and several atlases that he published himself.