The Karte des Deutschen Reiches 1893 consists of 674 sheets at a scale of 1:100,000. All sheets join together to make a huge, highly detailed and historically significant map of about 1,155 cm x 980 cm (38 ft x 32 ft), covering all of present day Germany and much of present day Poland. The maps show the landscape as it was at the end of the 19th century. We have completed the process of scanning all the sheets individually as well as making a very large digital composite image of all 674 sheets joined. We have put sheets 1 to 674 online and made a composite image of sheets 1 to 674. The composite image is also placed in Google Earth (requires app download)(the georeferenced composite image and any of its parts may be downloaded through the Google Earth Index Map), allowing comparison of the historical map with current satellite imagery and other information layers. We completed the project on October 1, 2011. The publication dates of the sheets vary, generally from about 1800 to 1900. For the whole series we use an average date of 1893.

After German unification in 1871, in an agreement dated March 4, 1878, the states of Prussia, Saxony, Bavaria, and Wurttemberg (the areas of modern day Germany, Luxembourg, Poland, and Kaliningrad, and part of Lithuania) agreed to map their areas on a 1:100,000 scale in a common topographic grid survey consisting of 674 sheets. Each sheet covers about 30 minutes in longitude and 15 minutes in latitude. One centimeter on a map is equivalent to 1 kilometer on the ground. Average sheet size is about 35 cm x 28 cm. Each sheet covers about 1000 square kilometers and was engraved on copper. A polyhedral projection was used. Prime meridian was Ferro, later switched to Greenwich.

The series is known as the KDR-100 (German General Staff map) and was surveyed beginning in 1878, although many sheets were simply drawn from pre-existing military maps, often of larger (more detailed) scale. This map series is remarkable for the level of fine detail. As a consequence, it was scanned at 800 PPI providing four times the resolution of the typical detailed map scan of 400 PPI. 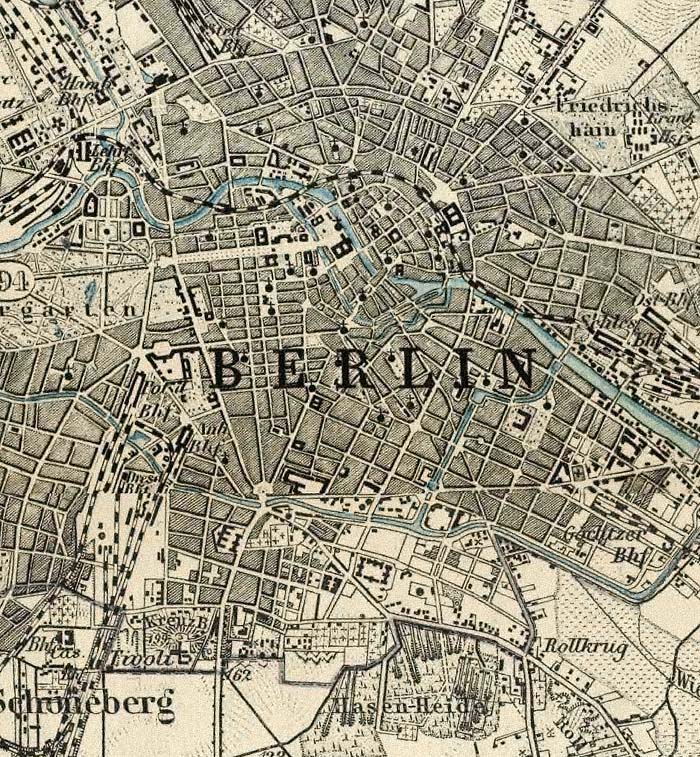 Here is part of the same sheet at 800% magnification: 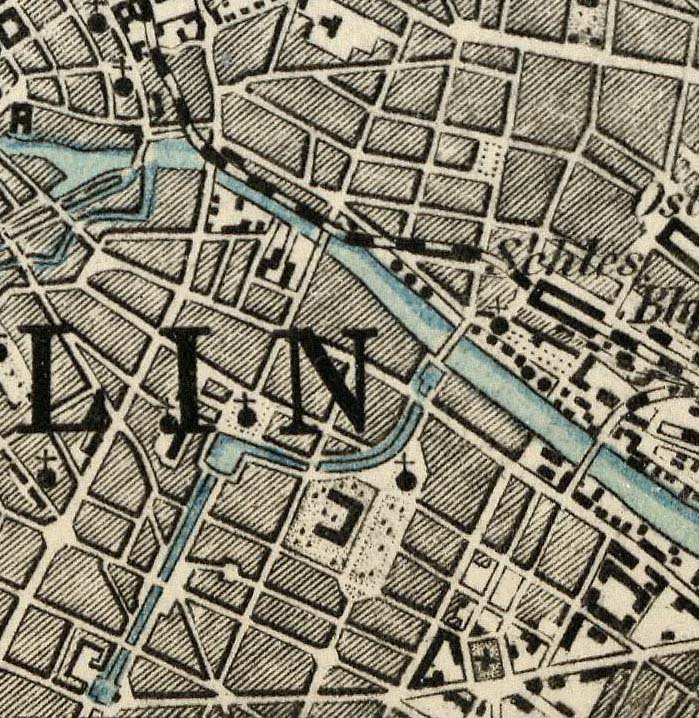 The dates of the maps are estimated based on the apparent library acquisition date, frequently stamped on the back of the map sheet, usually 1893. The maps are mounted on linen in 4, 6, or 8 panels.  Comparing our sheets to those at the Library of Congress shows that most of our sheets were published 5 to 10 years before the stamped acquisition date. Thus most sheets were published between 1883 and 1888.  A few sheets are duplicated and placed under similar list numbers.

Below is a typical sheet, Sheet 46, Neustadt in West-Pr. 1893, dissected into four parts and folded, with the map seller's label and map scale pasted on one fold: Here is the same map, with the four sections joined into a composite, to make georeferencing more accurate. 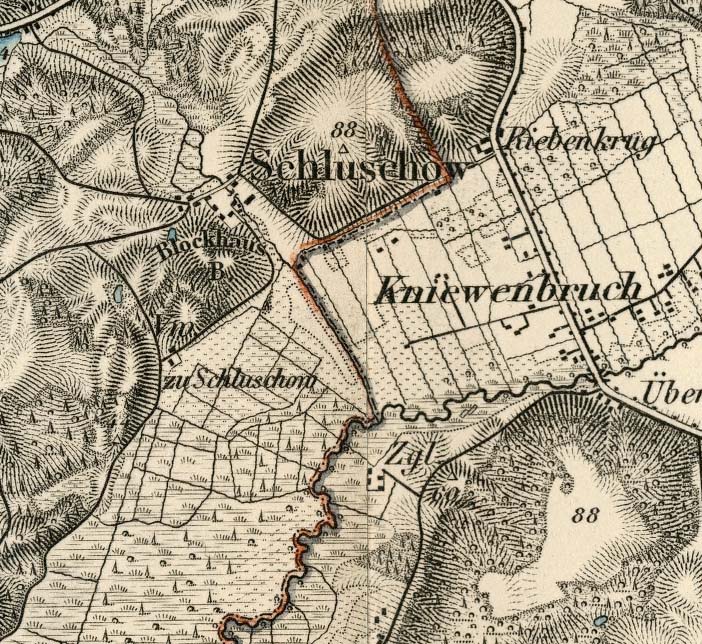 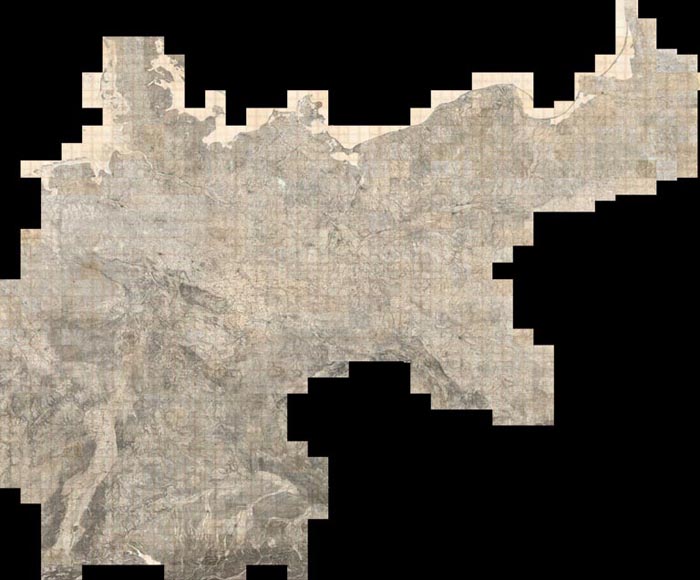 The same composite image can also be viewed in Google Earth: 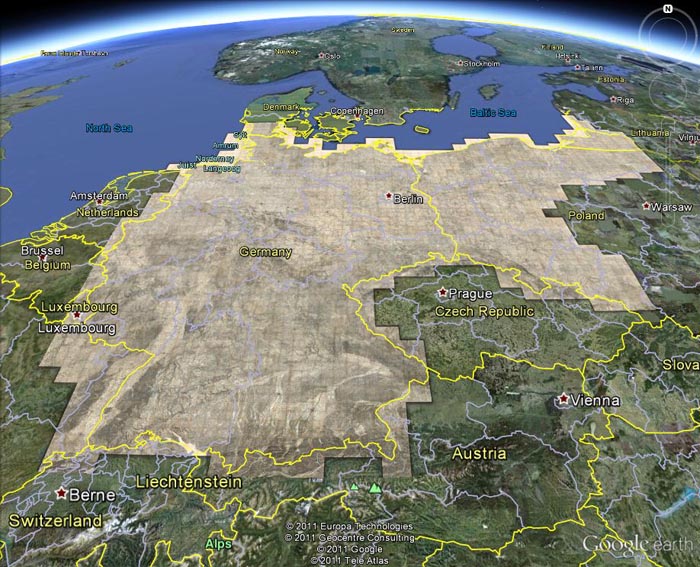 And the index sheet for the composite image can be viewed in Google Earth: 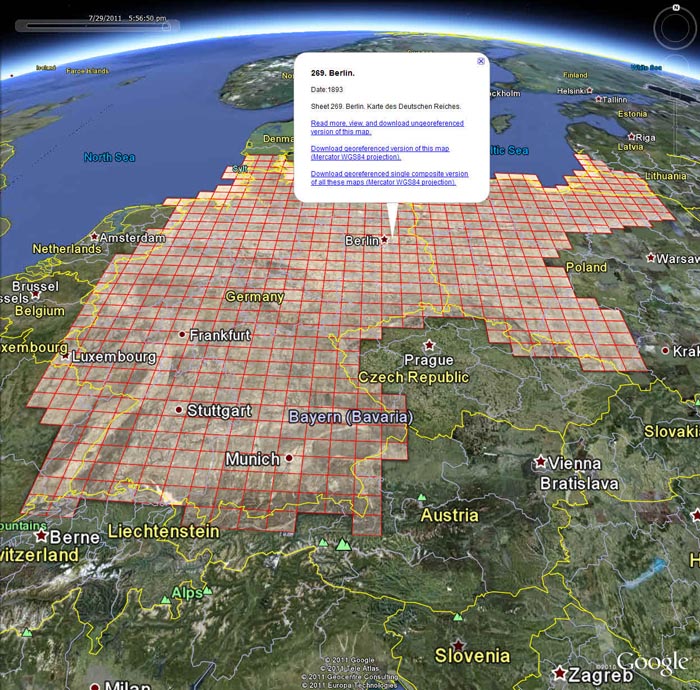 The composite image and the index sheet can also be viewed in the Google Earth desktop application (requires download if you do not have Google Earth installed). Or you can view these layers along with 300 other historical maps from the Rumsey Collection in Google Earth by clicking on this link.

The Karte des Deutschen Reiches have extraordinary map detail and many kinds of cultural, physical, political, and historical information. At least ten separate symbols for special buildings were utilized, a method enhanced by placing an abbreviation next to the symbol. Structures with special symbols include: churches, chapels, monuments, windmills, water mills, stamp mills, forester’s lodges, watchtowers, ruins, forts, quarries, clay pits, lime kilns, and coke-ovens. Factories, brick works, powder magazines, and many other important buildings are differentiated by means of abbreviation. Houses appear as black blocks, either rectangular or shaped like the ground plan of the building. Many other features are differentiated, for example there are four different qualities of roads plus bridle paths and footpaths.  See the legend here

This collection strongly trends toward the earliest editions. They were published for the General Staffs of Bavaria, Prussia, Saxony and Wurttemberg by several issuers, but most were by “R. Eisenschmidt, Verlags-Buchhandlung ” (publishing bookstore). (Berlin). Key organizations indicated on the maps include (1) Topographic Bureau of Royal Saxony, abbreviated in German as “topogr. bureau des konigl. sachs.” And (2) Royal Prussian General Staff, abbreviated in German as “Kgl. Preuss. Generalstab.”

Most sheets are stamped with "The Library of Massachusetts, State House, Boston," and the apparent date of acquisition. Almost all of the sheets are trimmed to the neatline to allow for closer alignment of multiple sheets when viewing, apparently a common practice by publishers of the sheets. Therefore the printed publishing date has been removed in most cases and we are estimating the date based on the acquisition stamp date (usually 1893).

Cataloging and research for the maps was done by Daniel Holmes, Librarian of the Rumsey Collection. Scanning and georeferencing of the map images was done by Glenn Bachmann of Cartography Associates. Global Mapper software was used to georeference and composite the map images. We are grateful to the Geography and Map Division of the Library of Congress for providing images of four sheets that were missing from the Rumsey Collection.

Oh my god. This is super awesome and exactly what I searched for years in the internet.

Many thanks from Berlin for that great work.

I found this site and I am absolutely fascinated. I thank you for providing such a great service and keeping it free! Thank you!

Awesome work! I’m a great fan of the KDR for decades, and this is more than I ever dreamed of. Now I can trash all my old paper copies made in the 1990’s. If someone ever will scan the old Preussische Generalstabskarte 1:86400 (predecessor of the KDR, around 1830) this is how it should be published!

You are the man! I have looked for this for more than a year!!! #

Very helpful site, especially for someone, who is looking for traces of the past ... Big thanks for your work! #

Dear Mister Rumsey, it was a great discovery for me to find Your collection especially KDR 1893-1904. I had great fun to georeference 177 maps (5.000 CP) with the german rivers to find differences in their location 120 years before. Now I know so much churches in germany. Many thanks and Merry Christmas Your Ralf Tüllner #

Hi, doing research brought me here on an old German map my great grandfather brought back from Germany in WW2. It reads "414. Zeitz" on it. Looks just like every piece of the maps shown here and bottom left is dated 1899. It is cut into multiple pieces and attached to a piece of material. Top center also reads "for internal use only" translated from German to English. I'm curious if this is related to the maps here? Thank you, Augustus #

I live in the USA, Indiana to be more specific. Where can I find a map legend for these maps? In the description it says the map is highly detailed using specific symbols for houses, mills, churches, hills, marsh, bushes, trees, cemeteries, etc. where can I find what these symbols are? I am curious. Thanks so much. #

This is a fantastic resource with an amazing amount of information for anyone with German ancestors. I do have the same question as the previous poster though: is the map legend available anywhere? Thank you. #

thank you so much ! thanks to your detailed maps I was to find the village where my great-great grand parents were born (Poland, 1882). I had data but some were missing ... before I saw your maps. Great job ! #

I have several old German maps that I cannot read which I found inside of a German book published in 1733. The maps are not as old as the book, but they all measure about 3’x3’. I’m am not looking to sell these, but merely doing research. Any advice you may have is greatly appreciated. Thx. WHB #